“news by those who live it.”

Jessica Mayberry Leads An Army Of Fighters Shooting For Change

EDITOR’S NOTE: The Goa Streets series, “Trailblazers of Goa: Passionate People Who Make A Difference” features photos and interviews with those who break convention, obliterate barriers, seize new opportunities and inspire the best in us. We have asked each of our Trailblazers the exact same questions about their lives and hopes for Goa (see bottom of this story). This week’s Trailblazer is Jessica Mayberry, whose organisation Video Volunteers has become one of the most important channels for uncovering both the burdens and advances of India’s most vulnerable citizens. Trailblazers of Goa pictures have been taken by noted photographer Eugen Hanley, with words by long-time writer and world traveller Hilary Lapedis.

A cooperative bank for sex workers. A child trafficked at 11 who comes home to indifferent police. A Kashmiri girl defiantly pursuing her cricketing dreams. A high school in Goa where students fear the roof will collapse on their heads.

Rather than sitting back and complaining about life’s injustices, Jessica Mayberry and her team of 250 “community correspondents” stand up and take action. By empowering rural communities where 70% of India’s population lives to self-represent and claim their public voice, Jessica is trying to redress mainstream media’s failure to shine a spotlight on the plight of the many. “In India, on any given day, only 2% of the content relates to rural India, where 70% of the population lives. ”The group’s videos are seen by upwards of 3 million people each month.

Imagine. Your community has a problem that can only be resolved by government intervention. You need them to be aware of the problem. Jessica and Video Volunteers are your one-stop shop. By turning the real into the reel, Video Volunteers lets those below the poverty line in India tell their stories.  The group estimates that a full 25 percent of the 1,200 videos they produce each year has led to local impact, when the problem the video documents gets solved. In some case, their work has led to specific policy changes, including a national increase in compensation for acid attack victims.

Jessica worked for prestigious news broadcasters in the US like CNN and Fox News but became disillusioned. They were “not questioning what America was doing all around the world.” She wanted to use her media skills to promote knowledge of other cultures. She chose to leave and come to India where she had previously volunteered at an NGO. With her Indian husband, Stalin, they harness the video potential of a nation of smart phone users to capture images that no one else will, using social media to spread it wide and far.

Goa became the couple’s home in 2008 and they base their headquarters of Video Volunteers in Anjuna. Goa, with its lush greenery and serene lifestyle, seemed the perfect place to raise their sons, aged 7 and 4. Basing themselves in Goa also makes it easier to attract good creative staff and volunteers. Their staff of 40, half of whom are based in Goa, hails from all over India and edit the videos that come in from their 250 community correspondents. These citizen correspondents all come from marginalized communities: 60% are women, 35% Dalit, 30% Adivasi and 20% are religious minorities. Most come from India’s poorest and most conflict-ridden districts.

One recent video tells the story of a survivor of 14 years of domestic violence in Madhya Pradesh who said, “He chewed my face like an animal.” Another uncovered the realities of dowry and child marriage in Rajasthan. Another tells the story of Usha, a cooperative bank run for and by sex workers in Kolkata. From its humble beginnings in Kolkata’s Sonagachhi neighbourhood, Asia’s largest red light district, today the bank helps some 30,000 people. Another video tells the story of Insha Mir, who overcame cultural prejudices to become the captain of her college cricket team in Kashmir, declaring she wants “to live fearless and free.” Here in Goa, Video Volunteers recently uncovered appalling conditions at the Sagar Bavdhan government high school in Canacona. The videos are shown to government officials and the local community, often leading to resolutions.

Video Volunteers runs its own video news service called ‘India Unheard’, and the footage also reaches the public through YouTube and other social media. Jessica has forged strong relationships with many mainstream news broadcasters like NDTV and CNN IBN. Between YouTube and their website, the videos garner about 3 million views per month – an astonishingly high number by any standard.

All of this has gained Jessica and her team prizes galore. She is a TED fellow and her trophy cabinet staggers under the weight of awards she’s won from Ashoka, NYU Stern Business School and Women’s E-News, amongst many others. Video Volunteers works with UNESCO, Girls Count and several hundred social movements and NGOs.

Only “when we feel the poor are adequately represented in the media” and have a voice will Jessica feel her work is done. Her many successes include ensuring adequate health personnel in remote villages and improving infrastructure in the country. To shoot for change, she needs no weapon other than a camera.

Jessica Mayberry, you make a difference – one video at a time. 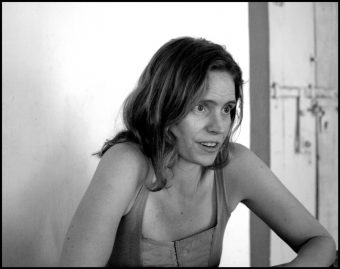 What inspires you about Goa?
I come from New York where everyone is busy 24-7 and obsessed with their careers. I appreciate being in a place where people are interested in spiritual exploration, local agriculture and a slower pace of life.

I don’t believe in kings and queens, but if I could be a sarpanch in Goa, I would stop trash-burning and work to preserve the beautiful old houses by helping local people secure loans for renovation. I’d also do a public awareness campaign to ensure everyone understood the building regulations and channels of authority, so they could stop illegal constructions as soon as they see a project breaking ground.

Ivanka Trump so I could talk to her – one New York woman to another – about the insanity of her not having turned against her father yet. Someone has to intervene!

Jon Stewart because he’s one of the best journalists left today and is surely the life of any party.

The author Ta-Nehisi Coates because he speaks truth to power like no one else does today.

My grandmother — she died before I was old enough to learn what she had to teach me about my roots.

The belief that an equitable society based on progressive values is possible, for the entire world, in my life time.

Right now, they are fairly immediate. Stop the coal port. Implement the Goenchi Mati Permanent Fund so mining – if it has to happen – at least benefits regular citizens. When I dare to dream bigger, I imagine that maybe, just maybe, Goa won’t be completely ugly within five years.

One of the things that disappoints me is that I’ve never made time in my life in India to explore spirituality here. I think foreigners come to India for three reasons – spirituality, money-making, or poverty. I definitely came here for the poverty, ie, to learn how to fight it. My mother came to India in the 60s on the hippie trail to spend time in Rishikesh ashrams with her ‘guru’ who subsequently followed her back to America and produced a rock album. Various cousins and aunts (all Americans) are devoted Tibetan Buddhists. For them, India is a place to quietly ponder the path to enlightenment and to be inspired by the religious explorations of others. That is so not my reality in India, and I’m curious about it.

For more information about Video Volunteers and to view the videos, log onto www.videovolunteers.org.